@ and The Magic of Christmas Giving

It was getting close to Christmas. All of the houses in the neighborhood had bright colorful lights along the rooflines and pretty decorated trees in the front windows. @ and his friends decided it would be really neat to go visit the North Pole. They made sure they had their warmest jackets, gloves, boots, and hats and they all went to the train station. 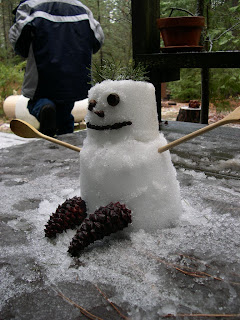 Then Engineer Doggie told them to dream of stars in a clear night sky. The kind of stars that sparkled like diamonds on a dark, dark blue sky. As they pictured the stars in their dreams, the stars fluttered to the ground like sparkling snowflakes.

They heard jingling bells. They excitedly opened their eyes. They were at the North Pole! The bells were jingling on the gate as a group of elves opened it and welcomed them in for a tour of Santa's village.

First they put on hardhats and safety goggles to visit the workshop. An amazing machine was making every different toy they'd ever seen or imagined. When the toys came out of the giant machine, they went on a conveyor belt into another machine that put them into boxes with wrapping paper and bows.


Next they went to the stables where a group of elves were taking care of the reindeer. They saw all of the reindeer and the harnesses that the reindeer would wear when pulling the sleigh. The elves even let them feed carrots to the baby reindeer. 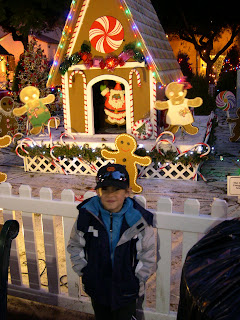 Then they went to the garage to see the sleigh. It was much, much bigger than they ever imagined. The elves were polishing the sleigh and checking all of the buttons and levers to make sure everything would work perfectly for Santa to do his deliveries on Christmas.

One of the elves in charge asked @ if he wanted to sit in Santa's seat. At first @ was very shy and said no. Then he changed his mind. He was up so high! He was careful not to touch any of those buttons. There were so many!

After their tour, they stopped at a big red door with handles shaped like candy canes. Blue Doggie knocked. From inside they heard "Ho ho ho! Come in friends!" The door opened and there he was. In person. Santa. He gave each of them a hug and showed them a tray with mugs of cocoa and a big bowl of marshmallows. They floated the marshmallows in their cocoa and sat on a big comfy soft green couch.

"I'm so glad you found the magic to get here," Santa said. "Only very special friends find the magic."

He asked them what they liked best about their visit. Blue Doggie told him that he liked feeding carrots to the littlest reindeer. Samba, who always likes sweets, said the cocoa was the best. @ was quiet. He wasn't sure he should tell Santa he had been in the sleigh.

"@, what did you think of my sleigh? Do you think it's ready for my deliveries?" Santa asked.

Then @ remembered, Santa sees everything! "Yes! It's the biggest, neatest, shiniest vehicle I've ever been in. It's even bigger than a fire truck!" he said excitedly.

"I have a very special favor to ask of you," Santa said. "It's a very important job. Do you think you can help me?"

The friends looked at each other and back at Santa, nodding. They couldn't believe that Santa was asking them for their help!

"I visit all the boys and girls around the world on Christmas, but there are lots of children who don't get any other presents," said Santa. "Not every family has money for toys and new things. Can you help me take presents to these children?"

"I knew I could count on you and your friends, @," said Santa.

@ was very happy that Santa had picked them for this special mission. And he was happy he got to do something special for other kids. Santa gave each of the friends a hug and showed them the secret door back to their train.

Outside the door was a wheelbarrow for @ and each of his friends, loaded with perfectly wrapped boxes like they'd seen in the factory. They rolled their wheelbarrows up the ramp of the boxcar on Engineer Doggie's train and filled it with packages.

They waved good-bye to Santa and their new friends and got back on the train. They got back into a circle and held hands. This time it didn't seem silly. Once again they dreamed of their own special snowmen, snowdoggies, snowkitties. And then they dreamed of the stars. When the stars fluttered to the ground like sparkling snowflakes, they woke up as the train was pulling into a station.

All sorts of kids were waiting at the station. @ and his friends went to the boxcar and handed out presents. As the last little boy came to the train, they handed him the last present. There were exactly enough presents for every child at the station.

They went to three more train stations. Each time they had exactly enough toys.

They were tired but excited when they got home to their own station. It was much more than their game of going to visit the North Pole and see the workshop. It was much more, even more than meeting Santa. They hadn't just seen magic. They had been a part of it.

~~~The End~~~
Electronically scrawled by Wordjanitor at 11:02 AM

A magical story, Kim. Thanks for sharing.