Showing posts from March, 2010
Show all

- March 31, 2010
A guy I work with, but whom I've never met in person, responded to my out-of-the-office auto-reply e-mail with "Are you having a baby?" Wha? Huh? Who in the h**...? My first thought was to respond, "Oh yeah, I forgot to tell you. It's yours." As an absolutely hilarious comedian* I saw last winter would say, "First thought wrong..." I didn't go with the first thought. Nor did I opt for the... 2nd: see above italics 3rd: "Been there, done that. Please donate to the March of Dimes" 4th: "Have we met?" 5th: "Please be available to field calls from HR." 6th: "Please see the attached photo from my endoscopy." 7th... * Mark Lundholm .
Post a Comment
Read more

Pudding for a 25% Shot at Immortality

It's tax season. And as they say, in this country anyway, the only sure things are death and taxes. But according to some smart folks in Sweden, maybe not. Pudding might solve one of those little problems. No, no really! I came across an interesting article. The all-too-generic headline, " Calcium Linked to Longer Life " is essentially the "Consumable of Some Sort Linked to Longer/Shorter Life" article du jour. In this case, my attention was suckered by the deck (that stuff under the headline designed to drag you into the rest of the article): People who get the most calcium in their diet reduce their risk of death by 25 percent, according to new research on calcium and health. Wha? Huh? Really? Bring it on! I clicked through to the article. It gets better. The editors provide immediately accessible advice under a nice little "what you can do" heading: "Boost your calcium intake by eating healthy food sources like low-fat dairy, spinach, kale
1 comment
Read more

Polar Bear in Pursuit? Just Use a BSO!

- March 29, 2010
Should you be chased by a polar bear down Mountain View's Castro Street while on foot, simply do a u-turn and a street fair will appear. Apparently, polar bears -- or people dressed in mangy polar bear costumes, yet still frightening when chasing you -- are easily distracted by jewelry at art & wine festivals. But perhaps only the variety of art & wine festival that appears like a pond in the desert when you make an abrupt turnaround midstreet. I'm not sure. I've not experienced another polar bear chase -- costumed or otherwise -- nor encountered an apparition-type art & wine festival . It was clear, however, that the jewelry (ooooh shiny, prett-ty shiny things) is what captured the attention of the bear. The BSO strategy works again. Four more instances where Bright Shiny Objects (BSO) work well in tough situations: Presentations that are not going well -- mention some new, obscure feature or technology and watch the eyes glitter as they quickly forget the
Post a Comment
Read more

Hiatus for the Cape & Tights

- March 24, 2010
I realized my invisible superwoman cape isn't working. I sent it to the wrong dry cleaners and they used some sort of solvent that neutralized my superpowers. That's what I get for trying to save a buck.  OK, honestly, I was never quite comfortable in the tights either. The stilettos gave me blisters. And the leotard always gave me a wedgie , which made the cape useful until I remembered it was invisible.  Why is it that superheroes always have such ridiculous wardrobes ? If they're superheros, wouldn't they have the special powers to save the world in jeans, a t-shirt, and flip-flops?  My ego has always tried to convince me that I could simultaneously climb Everest, juggle flaming chainsaws , work full time, keep up with @, and figure out how to live without snobbishly good dark chocolate as the fourth food group (the others were fruits & veggies, tofu, and whole grains).  Hmmm... There might be a wee bit of exaggeration there. But it sure sounds like a fairly re
Post a Comment
Read more

- March 18, 2010
Dead tuna do tell tales. As one friend describes it, "your stomach muscles just up and decided they didn't want to work for a living anymore." He continued on a short rant about the French and labor unions, but after 20+ years of hearing his redneck raving, I'm nearly immune. His pre-rant phrasing pretty much covers it. The medical definition of such activity, or lack of activity, is gastroparesis . (And no, it's not caused by stress!) Thanks to my lovely radioactive tuna sandwich experiment , not to be confused with Ken Kesey's Electric Kool-Aid Acid Test (which was waaaaaay more colorful , man), I discovered that although my brain spins quickly, my gut does not. Whee! Having answers I don't like is better than having no answers at all. After a several months of mystery starting last fall, increasing discomfort, and entertaining tests, it's now onward into the breach of figuring out the next step. OK now, this makes sense.   That makes sens
Post a Comment
Read more

I have a very big broom. I have often used it to sweep things under the rug in the interest of maintaining a relatively calm relationship with my mother. We've pretty much always had challenges getting along. I'm told I'm too independent. And not just from Day 1. Stubborn from Day -2, that's me. Apparently I have been a royal pain in the hindquarters since refusing to be born prior to her 30th birthday. Willful fetus that I was, I grabbed hold of her uterus and refused to come out for an additional two days -- not just one, two. Just to spite her. (The things you learn in a shared therapy session at the age of 18.) There were more crimes in my list. I embarrassed her. People often mistook me for a boy. I was a quiet bookish soccer-addicted tomboy instead of a gregarious perky girl. I was shy to the point of dissolving in tearful terror when expected to order ice cream . Oh yes, and willful. I willed my breasts to grow bigger than hers at an age far earlier than
Post a Comment
Read more

"Eat the whole thing, but be careful not to touch the filling," he said very seriously as he handed me a grayish tuna sandwich. Huh? OK, don't touch the tuna, just consume it? That's comforting. As was the fact he was wearing bright blue gloves. You don't want the stuff on your hands, just in your gut? Hmm... My breakfast was in fact a standard-issue hospital cafeteria tuna sandwich augmented with a lovely condiment of radioactive isotopes. Mmmmmm? Or Hmmmmm... Next task, remain absolutely still on a table for two full hours while nice people in lab coats use a screen to track the glow as makes its way through my digestive tract. I have an oddly convenient ability to fall asleep during medical tests. I actually slept through most of this one, until the last 30 minutes where I was fairly convinced my upper arms were going to catch fire from the position into which they'd been forced. (Good news, no actual scorching.) Yesterday's little snack-and-glow
2 comments
Read more

Reaching Out -- For the First Time 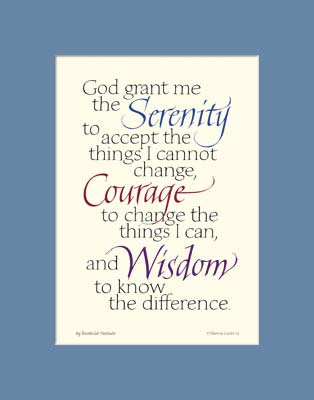 I've spent the first two months of 2010 growling at myself for picking the high-deductible medical plan, given how much time I've spent with the medical community thus far. I like rice and oatmeal as much as the next girl, but there's been precious little variety beyond that since November. Two weeks ago my esophagus and I had a photo shoot (think internal vogue-ing on enough valium to make a horse levitate). I expected to awake to answers, not "We'll have biopsy results in ten days." The concept of biopsy threw me; it somehow wasn't a word I was expecting. But it was less the potential of what it might mean than the nebulousness of not knowing the next step. Boy howdy the Serenity Prayer does come in handy when you're scratching for control you're just not going to get. God, grant me the serenity to accept the things I cannot change, the courage to change the things I can, and the wisdom to know the differenc e. I knew I couldn't change th
1 comment
Read more
More posts