Showing posts from October, 2007
Show all

Departure of a Lizard

- October 23, 2007
Sometimes you're faced with situations that, well, it's likely no one you know will ever have to face themselves. And sometimes those things are life-changing. And other times they're just freakin' weird. Case in point: Walked into my back yard Saturday afternoon and found a four-foot lizard. An iguana named Iggy, to be more precise. Unfortunately, Iggy was deceased. And unfortunately, I had to figure out what to do with Iggy before @ also discovered this little bit of Wild Kingdom (brought to you by Mutual of Omaha) in the back yard. Where's that safari jacket when I need it? After the WTF moment passed, I removed said reptile from the lawn and fairly nicely packaged it for the neighbor so that, when she returned from her latest experimentation with mind-altering chemicals, she could bond with her green friend before disposing of it. I considered a few alternatives, including leaving it on the hood of her car, but realized that the car has actually been missin
1 comment
Read more 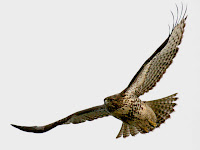 @ and I have a running commentary about chickens. When I don't know how to answer him, I bring in the chickens. He likes me to incorporate chickens into his bedtime stories. Sometimes he makes it very clear that I am, indeed, a "big mean chicken." When he barks, I cluck back at him and he generally replies with, "Quit bok-bokking mama!" (So then I meow and wind up going through a litany of other animal noises until I give up and return to the rusted trusted barnyard fowl.) With @'s brother, it's hawks. The relationship is different. I don't get to play the verbal games. But I see hawks in odd places. Or, it's possible the hawks were always there and I didn't see them. Shortly after the boys were born, a young hawk moved into in our neighborhood -- in the mix of Silicon Valley's freeways, expressways, and Starbucks. At first he seemed to spend a lot of time going from tree to tree as if trying to find other hawks or get his bearings. Ev
Post a Comment
Read more
More posts