Chuck E Cheese vs. the BMW

Admit it, the first image that comes to mind when you read "Chuck E Cheese vs. the BMW" has something to do with oversized rodent carnage and tire tracks. If you're over the age of eight, the BMW automatically wins in this scenario. Hands down. 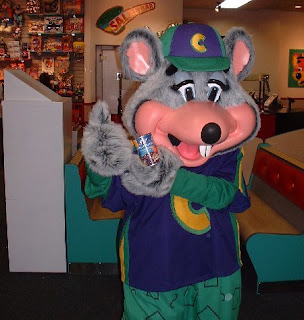 As visually oriented as I am and as satisfying that image happens to be, this is a different story.

I recently described myself as a duck with one foot nailed to the floor, wearing a circular groove in the floor. I've often used the un-nailed foot to kick my own ass for making mistakes, saying the wrong thing, failing to meet my own expectations, not having the answers, losing my temper, blah blah blah.

For the last few months, I've been actively taking steps to loosen that nail.

It turns out, I've had the tool in my hands all along -- a hammer. I was just accustomed to using it to ensure that darn nail would keep my flappy foot firmly fastened. I looked more closely at that hammer, turned it around in my hands only to discover that hey, the other side of this metal thingie can be used to remove nails! Who knew?!

I realize that such a firmly fastened foot can't be removed all at once -- it's a gradual process, but I'm ok with that. On Sunday I found evidence that I have, in fact, had some success.

After meeting a friend for tea, I had to pick up @ at a birthday party. I got in my car, backed out, and cut the wheel too quickly, resulting in the sickening sound of expensive plastic against even more expensive plastic. I pulled back into my parking spot, got out and assessed my handiwork.

A year ago -- heck, even a few months ago -- back when I had to be perfect and mistakes were unacceptable, I would have unleashed a silent set of four-letter words at myself. I would have berated myself for being stupid, not paying attention, picking the expensive car to hit. I might have pretended to leave a note in case anyone was watching, but would have been too embarrassed to actually face up to the owner of the car. And then I'd beat myself up over the guilt of not leaving a note, and over the fears that prevented me from doing it. I'd stress out and hold onto that feeling for quite awhile.

Instead, I left a note with my contact info, carefully wrapped it in a plastic bag (it was raining), and went along to the evil noise/germ/chaosfarm that is Chuck E Cheese. The 45 minutes there were exponentially more painful than the 5 minutes with the scratched BMW in the parking lot.

Later that day the owner of the car called. I was prepared for an angry guy tirade, but I got an amazingly gracious woman. It was her birthday and she was out with friends. At first she thought the note was from another friend wishing her a happy birthday. Alas, not quite. Apparently, I picked the right car to hit... The insurance companies will deal with the damage -- which, thankfully, is minimal -- and life will go on.

But I'll never get those 45 minutes of my life back from Chuck E Cheese.
Electronically scrawled by Wordjanitor at 10:05 PM 1 comment:

@ and I took Lucas to the "bark park" today. I know of few better places to take a six-year-old kidlet and an 80-pound dog who have been surrounded by various sets of four walls during a week of downpour. We spent nearly two hours among the other sun-seeking dogs and their drivers.

When we first started going to the dog park, both @ and Luke would stay close to me, with Luke eventually giving in to curiosity and dogness to venture forth and join the ranks of random pooches enjoying the park.

Today, Luke never stopped moving. He wandered, sniffed, wrassled, chased, mounted, marked, marked, marked, sniffed, lather, rinse, repeat. He gently stopped by when another dog approached @, just to be nearby. He's fun to watch with his big slobbery dog grin as he jogs to and fro.

But watching @ today was even better. He followed Luke here and there, saw dogs he wanted to meet and talked to their people, and introduced Luke to potential pals. His favorite dogs of the day were two massive Great Danes. Meanwhile, a German Shepard puppy named Bear was quite fascinated with @ and kept venturing over to visit him. When a Springer Spaniel knocked him over, @ giggled and stood up with a grin -- much to the surprise those who expected him to cry.

Ever the "worker," he took a post at the water faucet as the concierge. He greeted the dogs and their owners, making it his responsibility to keep the bowls filled. He obliged the dogs who preferred to drink right out of the spigot. He was quite serious about his role.

He generally walked around with a comfort and confidence I never knew at that age, and not for a long time past it. More than anything else, I am grateful. I am grateful to know that he has no sense of the fears I had as a kid. And yes, to know that I have not shared those fears with him and that I am part of helping him become that confident, cheerful, creative little boy.

I learn from him as he learns from me. That makes me the lucky one.
Electronically scrawled by Wordjanitor at 8:36 PM No comments:

Sometimes I can do no more than quote the wee boy:

Smashing marshmallows together to make sandwiches feels like trying to make a snake barf.
-- @, 1/23/2010

'Nuf said.
Electronically scrawled by Wordjanitor at 7:50 PM No comments:

Growing up, I was the smallest kid in class. Not cute, perky small. Just awkward -- definitely not one to fit in.

My mom used to take me and my brother to Elmer's Barber Shop so we could get haircuts at the same time. Striped barber pole out front and a guy with a waxed mustache. People always assumed I was a boy until the onset of puberty provided distinctions to the contrary. And at which time my hair went into a freakish Rosanne Rosannadanna phase that is truly best forgotten.

All of that ensured I got picked on a fair amount, but it wasn't life shattering. You're small, homely, and painfully shy. You get used to it. You also get used to fighting back or standing up to it. You do the cornered squirrel thing and show your teeth.

After the pediatrician announced that I wouldn't break five feet, three days of angry crying sparked some sort of growth spurt. My uncle helped find someone to cut my hair in a way that actually looked good. And my confidence on the soccer field helped kick my self-esteem into gear. Consequently, things mellowed.

I haven't been bullied in a long time. I ran into hyper-aggressive women on soccer fields in my twenties and have encountered random examples in my professional life.

I'd been asked to do something for an event and had prepared all week, checked in with other people, asked for advice, etc. Five minutes before we're set to go, a woman comes over to me, gets right up in my face to physically intimidate me, and quite aggressively tells me I am NOT going to do what I'd been asked to do. Zero attempt to waste time on kindness -- heck, even to introduce herself. Mind you, this was definitely not the an environment where you'd expect any such thing. But hey, challenges appear where they do!

I blinked as she stalked away -- it was a proclamation, not a conversation -- and had a nice little internal dialogue.

I think I just got hit by a truck.
Did she just do that?
Is anyone watching? Did anyone just see that?
I worked my butt off to get ready for this.


I went to check with the person who had contacted me last week. Vest lady had already blazed through -- she looked way more beat up than I felt. I wasn't going to add to her stress. I let it go, shifted gears, and went on with my other responsibilities.

Five years ago I would have gotten right up in the bully's face and told her to kiss my lily white... big toe. (The one without the titanium.) Instead, I stopped and breathed. I let it go. I found the good in it -- the person who replaced me did a good job, I'll be even better prepared next time, I got kind words from "witnesses," and the rest of the event was uneventful.

I have no clue to her motivation, but I know it had nothing to do with me. She doesn't even know me. It's her deal, her issue. I don't have to know what it is. And I don't have to set her straight. It's not my job. She'll figure it out or she won't. For her sake, I hope she finds a more peaceful way to be.

I know I'm finding mine.
Electronically scrawled by Wordjanitor at 9:53 PM 2 comments: