Dressed for Success (or Mini Trump Goes to Camp) 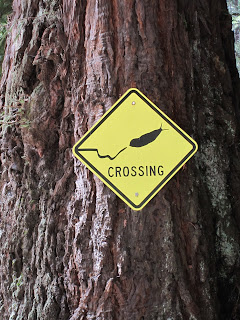 Friday was free dress for @'s school. Although it's a public school, they have a uniform of navy pants and white, blue, or green polo shirts. Whereas most of the other kids took the opportunity to dress down in jeans or sweats and t-shirts, @ dressed up in a button-down shirt and clip-on tie. (A little girl in his class also opted to buck the trend and wore a nice dress. Perhaps they're soulmates...)

After school it was time to head over the hill and off to the woods for a mother-son camp adventure at the YMCA's Camp Campbell.

He had asked if it was OK to wear his tie on Friday and then during "indoor activities if it's raining." I told him he could wear what he wanted to wear, but he might want to have the other clothes for hiking and such. He packed his bag with the traditional camping standby choices of jeans, plaid flannel, and thermal shirts, but opted not to change into "camping" clothes before we left. Hi-ho, hi-ho, off to camp we go.

When I was his age, you couldn't get me in a dress for money. I wanted to fit in and I spent a lot of my energy worrying about what other people thought, hoping they wouldn't make fun of me. @ spends his energy just being @.

When we went shopping for a new shirt for Thanksgiving, he saw the Dockers shirts with the matching ties. It was love at first sight... He likes to look like "the boss."

In the car the other day he asked what "fired" meant. I wasn't quite sure what he meant until he said "People keep asking me to say 'You're fired.'" With the tie, his glasses, and a notebook he carries to draw pictures and take notes -- he looks like the boss. Some of my friends have taken to calling him Mr. Trump. Luckily, he can't fire me. At least until he's 18. Oh yeah, and @ has much better hair.

Saturday morning arrived and he emerged from his sleeping bag, got dressed, and ta da, put on his tie. He opted to wear the tie all weekend. It actually went pretty well with the hiking boots. We hiked before breakfast, threw rocks in the creek, launched arrows at the archery range, hiked before lunch, hiked after lunch, built and painted wooden boxes, played games, tie-dyed t-shirts, roasted marshmallows, and built forts in the woods. All in a tie.

Quite a few people -- other moms, kids, camp staff -- were curious about the tie, but no one made fun of him. They just considered him the best-dressed kid at camp. And me, well, I'm the mom of the kid in the tie. And that's more than ok with me.
Electronically scrawled by Wordjanitor at 11:37 PM