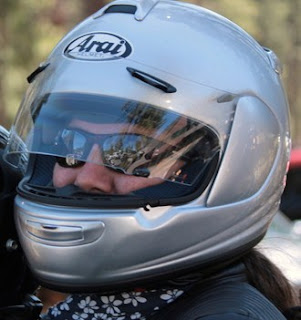 That's an understatement -- the part about the laughing.

Maybe goofy is an understatement too.

And on our last ride, some of the roads were really, really new. As in they were being paved as we rode by. Riding a motorcycle on a brand-new road is kinda like hot fudge on a sundae: smoooooooth.

As for helmet hair? No understatement there. Bumble and Bumble have nothing on Arai and Shoei.


I got my M-1 two years ago and bought a motorcycle. Two months later, I was rear-ended while in my car -- my really easy to see red car -- and my back hasn't been the same since. It's one way to keep the chrome on a bike bug-free. :-( Anyway...

But I'm a heck of a pillion. No, not an animal pelt.

As entertaining as whining about not being able to ride can be, I don't really sit still well. (Oh really? No, really.) So about a year ago I joined a local motorcycle group through Meetup so I could ride as a passenger. I showed up at the first ride with my gear knowing no one except through a few e-mail exchanges with the organizer and Tejas, who who agreed to take me as his pillion for the day.

It turned out pretty well. (Another understatement.) They start out each ride with a serious safety talk to go over the rules of the road. Biggest rules are to ride within your abilities and leave your ego in the parking lot.

Now I'm in three groups and I've been traversing all sorts of roads with some very cool people. And laughing. A lot.

And figuring out how to keep my hair looking fabulous through the twisties.
Electronically scrawled by Wordjanitor at 11:48 PM

I just can't wait to have a two wheeled car because its Eco friendly. Thanks for sharing this article.

Gee, I was there when it all started!