Squeaky Cheese and Other Such Wisconsin Things

Once upon a time on a very hot and humid planet, I learned about squeaky cheese. I have now been to Planet Wisconsin. And yes, cheese curds do squeak when you eat them – not in a mouse “eek” way, but a sound they make against your teeth. It’s a little weird, honestly.

When I told people I was spending a week in Wisconsin, they invariably asked “Why?” I told them I wanted to throw cheese curds at giant mosquitoes.I expected the cheese curds to be more like cottage cheese, which would have been quite a messy way to distract bugs. And I expected the mosquitoes to live up to “Wisconsin State Bird” status I’d been promised. The mosquitoes were completely overrated. I didn’t need a tennis racket to fend off the little vampires after all.

Although both my grandparents were born, raised, and met in Wisconsin, I’d never been before. But the reason for this trip was joining the Tall Guy to visit his family.

We landed in Chicago after midnight, picked up a rental car, and crashed at a hotel. I’m told it was a nice hotel. All I know is it had a comfortable bed and a shower. Oh, and I wasn’t afraid to put my stuff on the floor. In the morning we hopped in the car, fired up the GPS, and headed north to Green Bay.

I have passenger-seat narcolepsy. Put me in the car, hit the highway, and I’m soon snoozing whether I want to or not. Apparently, I can still discern bad music from good while sleeping and change the radio station, however. Once we passed Milwaukee, every time I woke up and looked out the window, I saw a rich green field with a big barn and grain silos. I wasn’t sure if we were actually getting anywhere, but the numbers on the exit signs kept changing, so I assumed that we were making some sort of northward progress.

But where were the cows? The cheese has to come from somewhere, right? Despite what I'd learned in the California Happy Cow commercials about Wisconsin cows trudging through snowy pastures, they apparently live indoors. I've smelled a dairy farm from the outside. I still think California cows are happier.

They’re serious about three things in Green Bay: cheese, beer, and Packers football. I don’t know that the list has a hierarchy.

Any guesses about how many times I’ve been informed that the Packers are the only publicly owned professional football team in the United States? And yes, I’ve seen an official stockholder’s certificate. No, wait, I’ve seen two. Framed. On walls. And when I answered, “Eh, not really” when the Tall Guy’s sister questioned whether I was a football fan, the resulting silence suggested I might need to quickly find a hotel. I could have gone one worse by saying “Go Bears” or “Go Vikings” but I didn’t have the keys to the rental car. 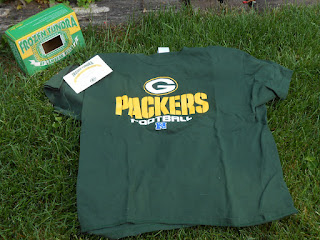 And here's a state where no one even blinks when an "expatriate" brings a Packers t-shirt to his brother's house to lay it on top of a patch of grass formerly part of Lambeau Field so it will "soak up" some of the Packer vibe and he won't be responsible for the team losing another playoff game because he wore a new shirt to watch a game. Don't ask, I can't make it sound any more logical. It just ain't. Remember: Fan is just the first syllable of fanatic.

I didn’t delve into the mysteries of Wisconsin beer, although the breweries clearly outnumber the Starbucks. But beyond the cultures of cheese and fanaticism of football, I witnessed this mysterious concept of a tightly knit family.

My family of origin is what you’d have to call loosely knit. As kids, the relationship between my brother and I looked a lot like two wet cats in a bag trying to be the first one out. My grandparents were nearby, but I didn’t have a whole cadre of cousins that converged on a regular basis.

While we were in Green Bay, we stayed with Tall Guy's older brother and his family. His parents joined us for dinner the first night (brats on the grill, of course). Second night dinner was a lake perch fish fry at his parents' house with older brother, plus older sister, her husband, and her older son. Third night dinner was a bbq with younger sister, her husband, two of her daughters, plus younger brother and his girlfriend. That's 15 family members in three days; 7 of whom drove more than two hours to join us. 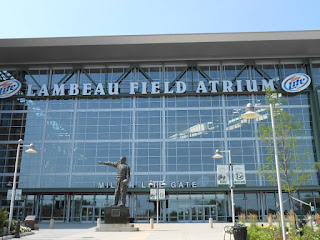 And then there were games. Serious bean-bag target-tossing tourneys that brought out the competitive streaks between brothers. Board games that first pitted "old vs. young" and then "men vs. women" resulting in some serious amusement. All I know is that a random reference to bra sent one niece into a tear-inducing spell of laughter.

We were there for a toasty heat wave, the Fourth of July Fireworks were pretty darned good, Lambeau Field was impressive, and I wrangled a detour to the Harley-Davidson Museum in Milwaukee en route to Chicago for our return trip.

And though the cheese curds were memorable, the best part of the trip was not only witnessing how the Tall Guy's family interacted and appreciated each other -- but being able to feel a part of the whole thing, (despite my lack lukewarm attitude toward football).
Electronically scrawled by Wordjanitor at 2:08 PM