I'd been hearing about last year's Quincy trip ever since the minute everyone got back. So when they posted it to the Meetup schedule waaaaaaaay back last winter, it was a quick click click click, sign me up!

Day 1: Ugly Fish & Pretty Rivers
Route: Quincy via the Delta and Feather River Canyon
The morning started with 50+ of us descending upon on an unsuspecting Livermore Starbucks from random bay area points for pre-ride caffeinating and safety talking. It's a funny thing, when that many motorcycles show up in a suburban strip mall, the coffee sales go up but the minivans seem to scatter. Go figure.

We staged in four groups, each with a lead rider and a sweep rider. We're big on safety and small on egos. It's safer, less stressful, and therefore more fun. As for the sweeps, it's a bit like the military -- no rider left behind. (Except without that whole boot camp and war thing. Oh, and the uniforms. I've never been big on uniforms.)

The first leg of the trip was cruise through the San Joaquin Delta to Sacramento and along the river to Natomas, where we stopped at the Virgin Sturgeon for lunch (notes below). Here's where I learned about invisible shirts. One of the guys explained that he had brought extra shirts to sleep in because he was sharing a room with women and he thought they'd be more comfortable if he slept in a t-shirt. I suggested that his chest might not be the issue and maybe a different article of clothing would be the solution. But then I learned the secret. Apparently if you sleep in the right kind of shirt, you become invisible, which can be advantageous for a guy in a platonic room-sharing agreement with female friends. Who knew?!

After passing some fairly amazing riverfront houses, we caught Highway 70, which ran stick straight from I-5 to Oroville, where it  then goes up into the hills and finds the Feather River Canyon. Wow. The highway and train tracks criss-cross the river through an amazing canyon. We had to stop a couple of times for roadwork, but it's hard to complain when the traffic stop happens at a perfect photo op of the train bridge running beneath the road.

After going a bit further through more sweeping curves, postcard views, and random tiny towns we arrived in Quincy. We were booked at the Spanish Creek Motel with half the group, with everyone else across the street at the Gold Pan Lodge. The people who stayed in the Gold Pan had a much more clean and comfortable stay. Five bucks more and worlds apart...

As a wise woman named Betsy once said, "at least the Bates Motel had shower curtains."

Several of us took a quick walk downtown for dinner. Among lots of cool, historic buildings we found Pangea Cafe and Pub for dinner. Healthy stuff and a hippie vibe, it reminded me of Santa Cruz.After dinner we joined most of the others to basically take over the Main Street Sports Bar, where they had a live band. Where else can you celebrate a friend's birthday by watching her sit perched on a bar stool, while five or six guys from the group dance suggestively around her while the band plays? Needless to say, this group never runs low on laughter. Ever. I'm not much of a bar closer, but we have a few people in the group who can get that done.

Day 2: Graeagle & Frazier Falls
After a good breakfast Courthouse Cafe, I wandered over to a place I'd seen mentioned on the web when I looked up Quincy the day before the trip. A block off Main Street, we found Ada's Place. It's too bad the couple who originally booked the cottage had to cancel that morning, but we were more than happy to take their place. It was a much better option than my first thought: Sleeping in the parking lot of the Spanish Creek instead of in the room.

For Saturday's adventures, the group split up into several smaller groups. Some brave souls went all the way to Burney Falls (270 miles), others stopped a bit short in Lassen. They all came back talking about how cold it was. Beautiful, but cold.

We opted for a shorter ride on Saturday and headed through Graeagle to Frazier Falls in Plumas National Forest.I'm sure Burney was great, but Frazier was pretty spectacular. The road is paved all the way to the parking lot and the half-mile trail is paved all the way to the lookout. Had we been there a month earlier when snowmelt was heavier, it would have that many more degrees of spectacular. The falls drop about 200 feet into a glacier-cut valley with ice-scarred boulders all the way.

After a quick lunch at the tiny Graeagle Mill Works, it was time for a nap in our perfect little cottage, which more than made up for the rough sleep the night before.

Saturday night was a big group dinner at Cafe Le Coq further through downtown, but still walking distance. Despite plenty of warning and visits in previous years, they weren't prepared to handle such a big group. But put 50 adults in a crowded space named for the French version of rooster and there's plenty of fodder for laughter to be found. And inexplicable (?) fondling of ceramic rooster critters. 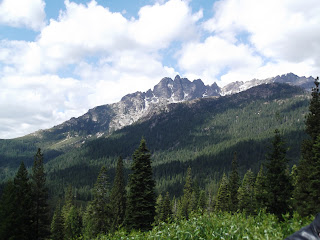 We had a great breakfast at the Morning Thunder Cafe and met everyone at 9a to stage the groups and head back to the bay area.

After Friday's swoops and sweeps through the Feather River Canyon, it was hard to imagine the the route home could hold up on the scenic meter. But it did indeed. We followed 89 toward Truckee, but split off at CA-49 to follow the Yuba River and through blink-and-you'll-miss-it gold-rush towns and Nevada City before emerging at Grass Valley. The views before CA-49 dives down along the Yuba are pretty amazing. Snow on the rocky peaks and valleys carved out of granite. Also called "The Golden Chain Highway" in that area, it's a beautiful ride through tall pines.

We had lunch in Penryn at the Cattle Baron's Cafe, which is right off the freeway with plenty of parking -- just what a large group of motorcycles needs. They were ready for us and . Somehow it was a much quieter meal than Friday's lunch. Energy levels were a bit lower on the way home.

All in all, it was a great trip with all of the requisite components: great route, great people, great weather, and great fun. Our organizers Pam and Cam did a great job of organizing the routes with gas and food stops, arranging for restaurants to be prepared for our large groups, and keeping everything organized.
Electronically scrawled by Wordjanitor at 5:24 PM