Notes from stops along the way on the North Coast... 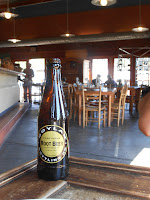 Last time we went through Point Reyes Station, we had lunch at Station House Cafe -- it was good, but this time there was a line out the door. So we went around the corner. It looked pretty empty, but we went for it anyway. All those people in line at Station House Cafe? Bummer for them! TG and I split a salad and a pretty-much-perfect flat-bread pizza from the wood-fired oven. Point Reyes Station is big on organic food and even bigger on good cheese. The dining area has a big old-school coffee roaster that they fire up once a week and a wall of french doors opening to a wood deck. Reasonably priced, nice people, no wait, and yum. (September 2012)

Station House Cafe
11180 Highway One, Point Reyes Station, California
Any place that can accommodate 40+ people on motorcycles without freaking out gets bonus points. This place has a great brick patio garden with tables, fountain, and shady pergolas. Oh, and good food too. I had a wild mushroom sandwich. Yummy. From oysters to sandwiches to salads, everyone seemed pretty happy as we headed further up the coast for the next part of our ride. (August 2012) 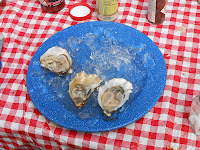 I'll be honest, I'm not a big fan of oysters. They're just not my thing. But hey, other people like 'em and who am I to judge? We stopped at Hog Island on our way up the coast to stock up for the evening campground potluck. There had recently been an algae bloom that prevented them from farming their own oysters, but they'd imported some from up and down the coast. They have huge aerated tanks to keep the shelled snot fresh and happy. We picked up several dozen -- some small (Morro Bay, California) and some medium (Oregon). TG shucked 'em and we served small guys raw and we bbq'd the medium ones with garlic butter and cheese or bourbon. The verdict? Lots of happy campers, much enthusiasm over oysters in all forms, and we're invited back. 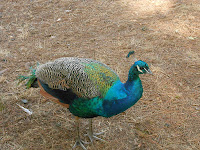 If you're going camping with friends who are skin divers, Stillwater Cove is a good place to go. Why? Because your diving friends may just happen to surface with abalone. Of course, you'd only eat it if they caught it legally, right?! (Note: The only acceptable form of poaching is related to cooking technique, not hunting or fishing technique.) Fire pits, raccoon boxes, bathrooms with hot water and showers (bring your quarters), a fish cleaning area, and good-sized sites. We shoehorned several tents into two sites, but it didn't feel crowded. And the peacocks were fearless, but thankfully not vocal! Some of the other sites were closer to one another, but we had the advantage of friends who knew the best spots.

Electronically scrawled by Wordjanitor at 10:40 PM