This Saturday was one of @'s favorite days of the year, the annual March for Babies walk. He was six months old and still on oxygen the first time I did the walk, but he has been there every year since, making it his sixth walk and my seventh.

In @'s world, the first few years were about the balloons and the noise, then it was about being a surviving preemie, and now it's about helping babies and walking for his twin brother.

It's a tiring day for me, both physically and emotionally. It's a reminder of

The first signs that maybe I had the wrong gastroenterologist were sitting in the waiting room when I arrived for my first appointment. The magazines. High-end car, travel, food, and wine magazines.

As far as I'm concerned, one of the primary reasons for the existence of magazines like People, Entertainment Weekly, Us, etc., is to entertain patients who are patiently waiting for their doctors. Especially doctors who set their watches according to

Read more »
Electronically scrawled by Wordjanitor at 9:43 PM No comments: Links to this post

Being a word geek, I appreciate good writing when I actually do sit still and watch TV. A pretty new show called Parenthood has some good writers...


Electronically scrawled by Wordjanitor at 1:57 PM No comments: Links to this post

Instinct & the Intersection of Teachable and Moment

How to Explain Instinct to a Six-Year-Old

Me: If you saw a doughnut running across the yard, you would try to catch it and eat it, right?
@: Doughnuts don't run, mommy.
Me: But if doughnuts could run and you saw one in Barbara's yard?
@: I'd catch it and eat it! But mommy, you're still goofy.

Why to Explain Instinct to a Six-Year-Old
This morning, Luke followed his oh-so-doggy instinct and caught a squirrel. It was a baby squirrel. Probably a preteen in the world of squirrel years. Luke had chased the mama squirrel and lost. He turned around to find himself staring at the baby squirrel. The chase was short and fruitful.

See squirrel. See squirrel run. Chase squirrel. Catch squirrel.
Wait! What? I caught it? I've never caught anything.
What do I doooooo?
Uh oh, they're coming toward me. They look concerned.
She's yelling "house!"
Drop the squirrel!
OK, I'm going into the house. You don't have to ask me twice!
What just happened? I actually caught something other than kibble?
Whu huh?

Once I got Luke in the house, my neighbor J and I went to check on little guy. Meanwhile, mama was rightfully losing her squirrel-marbles in a tree across the street. Little guy was breathing, but not looking terribly comfortable. We went over to J's porch to give mama squirrel an opportunity to check on little guy. Mama squirrel maneuvered closer.

Neither of us could decide whether to put little guy out of his misery or give him a chance to recovery. Likewise, neither of us pictured ourselves doing squirrel resuscitation or a Kevorkian routine. After getting over the initial shock, little guy did some hopeful flopping. Or flipping. Maybe both. Mama squirrel maneuvered still closer.

We decided to give little guy time to recover, but were wary of neighborhood crows. I went back to my house, J to his. A bit later I heard a crow going bonkers. Interestingly enough, he was chasing my hawk. Both birds seemed oblivious to the unfolding squirrel drama.

Awhile later, I checked outside and saw mama squirrel near the baby, but a crow even closer. I chased off and cussed out the crow and went looking for a cardboard box. In the 3.217 minutes it took me to procure a box and towel from my garage, Barbara's cat appeared. I cussed out the cat, put the squirrel in the box with a towel and moved him to my porch.

For some reason, I decided liberal use of the f-bomb toward birds and cats would be helpful to little guy. I knew he wouldn't survive, but I didn't want to see him eviscerated on the lawn. Mama squirrel tracked my every move from directly above in the magnolia tree.

Welcome to the Intersection of Teachable and Moment
Shortly after I had set up little guy on the porch, X dropped off @. I told @ he could look in the box from a distance, but he needed to be quiet. He sat on my lap on the lawn while I explained that in the box was a baby squirrel and it would likely die.

@'s first instinct was to be simultaneously angry with Luke and sad for the squirrels. I completely understood. He was upset, but I had to explain the concept of instinct itself.
We were gone for most of the afternoon and when we came home, little guy was no longer moving. @ decided he was sleeping and I opted not to correct him. Once @ was safely snuggled into bed, I attended to the disposition of little guy.

I hope mama squirrel got her chance. I had a week that brought up several remembrances of grief and found myself revisiting feelings of losing N (@'s brother). And then this morning's squirrel escapades found their way into my day. To me, the hawk's visit was no coincidence. It all feels like some sort of closure on the week.
Electronically scrawled by Wordjanitor at 10:15 PM No comments: Links to this post

I heard an amazingly beautiful story today. I'll do my best to retell it here.

A grandmother was tucking her six-year-old grandson into bed.
The little boy, whose father had committed suicide a year prior,
asked her what death felt like. 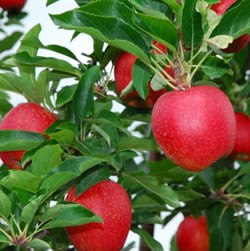 Caught off guard, she first responded, "It probably doesn't feel like anything."

Then she explained that if you have a strong spirit,like his daddy did, she believed your spirit continued on and took another form.

The little boy thought for a moment.

"I think my dad's spirit is an apple tree. He had a really healthy body and he liked apples," he said. "But his mind wasn't healthy."

"I hope he's an apple tree and he can see the sky and feel the fresh air on his branches."
Gulp. Yeah, it brought tears to my eyes. Still does.

@ asked me yesterday what "represent" means. We talked about it and I used my hawk tattoo as an example, saying that for me it represents N, his twin.

We talked about how after he and N were born, a small hawk started spending time in the trees around my house -- showing up every once in awhile as if it were checking in, then flying away.

Always one with an answer, @ explained it to me. 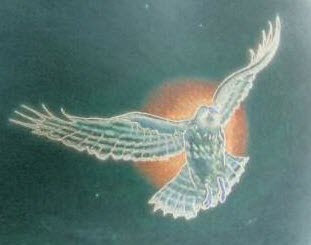 The hawk comes to our house
to look for N and
when he can't find him
he flies away because he's so sad.
Gulp.

The wisdom of six-year-olds: There's no pretense. There's no "I wonder if this sounds wrong" or "What will people think if I say this out loud?" There's just the pure, clear, truth as they see it.

(And yes, six years later, the hawk still visits.)
Electronically scrawled by Wordjanitor at 1:03 PM No comments: Links to this post

The ER and Wizard of Wonderland 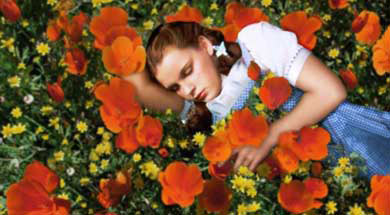 I went to check out Alice in Wonderland and...
ended up a test subject for The Wizard of Oz.

After making it about 20 minutes into the movie, I started feeling relatively horrid, went home, and my fantabulous neighbor took me to the hospital. It is a bit amusing to go to the ER on April Fools' Day with your due-to-give-birth-in-two-days friend and identify yourself as the patient.

But we have good news!
No answers -- ok, except that I can and I still feel icky, but I'm home chillin' on the couch. Oh, and despite the morphine, there were no flying monkeys.
Electronically scrawled by Wordjanitor at 10:12 AM No comments: Links to this post