I Got a Boo-Boo

I got a boo-boo on my knee.

A good friend invited me to go hiking yesterday. Yes, absolutely, ok, let's go. I didn't bother asking where, how far, and all of those details. It didn't really concern me. And who am I to turn down an excuse to be outside with trees and dirt and stuff?

So off we went to Sunol Regional Wilderness and hopped on the trail along Alameda Creek to Little Yosemite. It looked to be a pretty mellow ambling walk along a well-maintained
fire road in the grassy hills. Big oak trees along the way and all of those good things.

At some point, my friend asked if I had good balance. I ignored the not-all-that-very-distant memories of my physical therapy exercises, and reported that it was "pretty good." And thought, hmmm... Is this important?

Pick your source, but the definition of hiking is usually along the lines of
Oddly, both of these definitions center on the verb walk:


a : to move along on foot : advance by steps
b : to come or go easily or readily
c : to go on foot for exercise or pleasure

Not far into our journey, we strayed from the main trail and took a smaller trail down to the creek. Our step off the main trail was also a right turn (or was it a left turn? maybe a u-turn?) from the definition of hiking.

And that's what made the day so great. I remember hearing my friend talk about this hike with someone else and thinking, "I wish I could do that." It wasn't so much wishing I could find the spot and go, but that I could accomplish the rock-to-rock adventure up the creek to the falls. I just assumed I couldn't.

Six weeks ago I was spending a lot of time indoors, on my couch, trying to figure out what I could eat that would give me some ounce of energy without also delivering pain from actually processing the food itself. I was sleeping a lot of the day and generally getting used to "this is what it's like now."

Gradually I've been feeling better. I'm back at work, getting through my days with less discomfort, and not building my days around my couch. @ and I went on a relatively mellow little hike last weekend and it felt good. But I haven't really challenged myself.

In fact, I haven't challenged myself much in quite a long time. Plenty of challenges have recently landed on my doorstep: the health thing, a big project at work, some legal stuff, and other distractions that I haven't particularly sought out as entertainment. 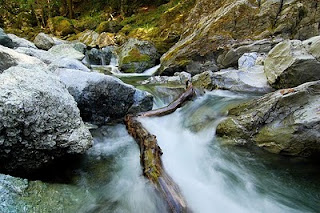 Meeting challenges and seeking them out -- very different concepts.

But this was different. I was looking up a creekbed of boulders varying in size from footballs to Half Moon Bay Pumpkins to Mini Coopers. The chickenshit half of my brain balked at first. Then the other half of my brain took over when it noticed my friend happily hopping along the rocks and making his way upstream.

I watched where he went and followed. Early on, I stumbled and landed quite ungracefully with one foot in the water and the rest of me intact but somehow spread across about five different boulders. (No video exists, thankyouverymuch.) I had skinned my knee and probably obtained some bruises that would bloom the next day, but I was fine. And there was no damn way I intended to quit.

Along the way, the spelled-out version of NFW came into my head at least a dozen times. (The polite definition of which is: no feasible way.) And I'm sure I said the non-polite version out loud more than once.

Once or twice, I took the path of least resistance -- or perhaps it was technically the path of most resistance because it entailed crawling over more rocks vs. jumping over bigger gaps. I'm not fond of heights. I kept coming to spots where I would have normally turned around. But in most cases, I didn't. I made the leap of faith and foot and made it to the other side.

When I hesitated and my friend told me I could do something that seemed beyond my abilities, I listened to him rather than to the self-doubting nag in my head. And oddly enough, he was right. (Yes, that's now in writing, online, forever in the wonderful world of the Internet. I was wrong. Someone else -- a guy, no less -- was right.)

Meanwhile, I managed to scratch my way up and over rocks much taller than my own height, jump over a variety of drops from six inches to I-don't-really-wanna-know-how-far-down-that-was, and otherwise find my way up the waterfalls. Beyond the waterfalls, the creek is wide, moves slowly, and is perfect for cooling bootless feet for a nice rest.

This morning, I have scrapes, bruises, and sore muscles. And they're wonderful trophies from a most excellent day.
Electronically scrawled by Wordjanitor at 1:44 PM