Avoiding danger in the long run is no safer than outright exposure.
Life is either a daring adventure or nothing.
- Helen Keller 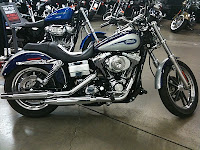 I recently decided to do something for myself. Pedicures and massages are great and all that. I guess shopping does it for some girls. OK, lots of them. Maybe even legions of them, given stacks of evidence ranging from
the size of mall parking lots (7700 spaces at Valley Fair) to the number of trees massacred to create catalogs.
But I've never been too aligned to the laws of the girl pack, so to speak. A new pair of shoes just isn't going to soothe my soul. But a motorcycle might.

This week, I passed my written test for my motorcycle safety class and had some nice celebratory chocolate cake courtesy of Faultline Harley-Davidson. I took the full class and passed my skills test a couple of weeks ago. Papers in hand I'll trot on down to the DMV to get my M1 endorsement. (And heck, while we're at it, let's restore my surname to its rightful place at the start of the alphabet by dropping the weight of the one that went with the shiny ring I used to wear.)

Reaction to this new adventure has been mixed. In general, women seem to think it's cool. On the other side of the gender wall, the reactions are definitely varied. Some guys think it's great, while others have hopped up on rather large soapboxes and lectured on the riff of selfishness and irresponsibility. One even decided it would be reasonable to offer up himself as a replacement if I wanted thundering power between my legs.

WTF? Did he just say that? Really?
Wait? He did.
WTF indeed?!
(Dude, next time you have an inclination to call me with such a comment? Don't!)

My dad taught me to ride his Honda Interceptor: "this is the clutch, this is the brake, this is the throttle, don't crash." I went around the block a few times. Not a good learning bike. I think first gear probably went to 110 mph. (My dad thinks I'm prone to exaggeration.)

I had a nifty little Yamaha Seca 400 for awhile in my 20s, but never learned to ride it properly. I eventually sold it and figured I had that whole thing out of my system. Ha. Ha ha ha.

But then... I spent quality time last fall on the back of a Road King (that's a bike, not a guy). And that set the hook.

Back at the start of the year when I was sick as a mutt, it seemed like the only thing I'd be riding would be my couch with all the power of a remote control in my grip. When you've hardly breached your forties and suddenly need a midday nap, it's a shock to the system. I don't sit still well.

But it was me and the couch. A lot of discomfort. Very little energy. And not much of a positive vibe from the medical community. The general reaction to my diagnosis among doctors seems to be "wow, bummer." There is no cure and there are few treatments. Nope. "Wow, bummer."

But once I had that "wow, bummer" diagnosis, I learned to adjust this, accept that, deal with the bad days, and take advantage of the good ones. And somehow in there I decided I wanted to spend more time on two wheels. For myself. Because when someone knocks you onto the couch, you decide once you get up, you ain't getting knocked down again.

So now I've taken my class and gone from "am I sure I wanna do this" to making a nice happy home in my garage for my bike to be. And if you're presenting your narrative for slide 72 of the latest greatest slide deck, my apologies when I perk my ears as something cruises by on the road outside the conference room. I'm sure that will fade when I have my own bike.
Electronically scrawled by Wordjanitor at 8:41 PM