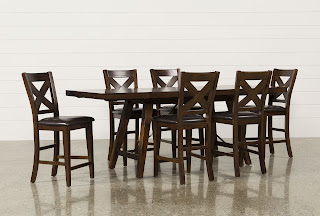 I try to make purchase decisions based on need vs. want. I'll often see something that I really like but opt out of buying it because I don't need it. I'd rather be happy with what I have than focus on wanting things I don't. (Yes, I did need the motorcycle. For mental health reasons. Yeah, that's it.)

OK, let's not get distracted by facts.

Exhibit A: I still have a bra that the dog chewed during her awkward post-puppy supportive undergarment chewing phase. She absolutely disabled another one, but this one survived with an interesting fringe in the cleavage area. It's serviceable. It's more of a yard-work bra than an office bra, not that anyone would really know. Until now, anyway. Bonus: I smirk every time I put it on.


Exhibit B: The table. I've had the same kitchen/dining table since my first solo apartment during my junior year of college. It's serviceable, albeit small. Meals for more than four people are awkward arrangements of elbows bumping and knees negotiating table legs. But it works.

The table came with two chairs and a good story. The story: I invited my parents to dinner and told them they'd have to sit on the floor. My dad arrived with a few large boxes and a screw gun. A little bit of hocus pocus and -- ta da, I magically had a table!

(I've spent years trying to come up with other magical formulas to make free furniture appear to no avail.)

I've long since replaced the original chairs, but the table has moved from apartment to apartment, house to house, city to city. It has supported thousands of meals, random art projects, and a grammar-school career of homework with the kid. I've owned few things longer than I've had this combination of wood, glue, bolts, washers, and nuts. I've never needed another one.

But in my quest to impersonate an adult, I'm in the middle of remodeling my house. I have room for a larger table. The original one looks small in the new space. And we have an increasing number of meals with more than four humans sitting. So, although I didn't need really a new table, I decided I wanted one.

I found one, thought about it for a few days, then went back to the furniture store to order it during my lunch hour last week. Today, we took the truck to pick up the new adult-y table and eight chairs. (I know at least one person who will read this and claim one of those spots for herself. Right, Monroe?)


TG dismantled my trusty college table, but it will live to serve another day. @ asked that we stow it away for his first apartment. (A day coming sooner than my brain wants to calculate.)

Suddenly, there was a big space in the dining room.

And now that space is filled -- with boxes. TG went to assemble a chair and it was clearly not the right height. It turns out that the table comes in two heights and the salesperson ordered the wrong version. I didn't even know the table came in another version. Surprise. Three phone calls later and the replacement is on the way -- in five to seven days.

So now, somewhat ironically, I need a table.
family ha